Looking for suitable materials for Aqueous Organic Redox Flow Batteries (AO-RFBs), the new organic
compounds synthetized within the CompBat project are tested in lab-scale flow batteries at
University of Turku. The studies, performed inside a glove-box, involve lab-cells with an active are of
5 cm 2 . The experiments consist on galvanostatic/potentiostatic cycling to study the stability of the
new molecules. During this work, different supporting electrolytes, membranes and concentrations
of the active materials are studied. The batteries ran inside the glove are shown in the next pictures. 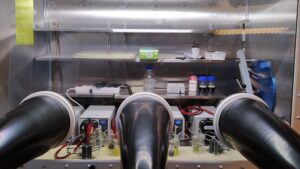 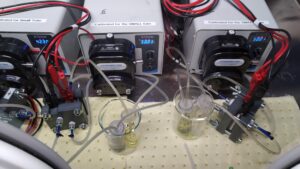 Further studies are performed using commercial Pinflow lab-scale flow batteries with an area of 20
cm 2 . The experiments involve both a standard single cell and a cell stack that comprises 5 single cells
with the same characteristics. The picture below shows the set-up of the cell stack ran with
vanadium electrolyte including additional cells to measure half-cells state of charge and over-
potentials, as well as recordings of the potentials of each single cell. 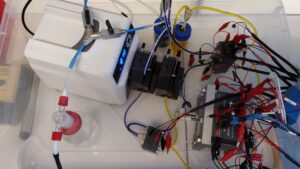 The following video shows the assembling of the Pinflow battery (single cell) by one of the CompBat
researchers at University of Turku. The assembly consists on the insertion of the different battery
components in the following order: end plate, current collector, bipolar plate, seal, first flow frame,
first carbon felt electrode, seal, membrane, seal, second flow frame, second carbon felt electrode,
seal, bipolar plate, current collector, end plate. After that, a torque wrench is used to tighten the
screws to a fixed torque value. The cell is ready and connected to the tanks. Then, the electrolytes
from both reservoirs are pumped to the cell and back to the tanks.