The work performed so far within the CompBat project by the University of Pisa, with the support of all the partners, aims at modelling a multi-cells stack system of redox flow batteries (RFBs). The level of detail is a compromise between accuracy and computational burden, targeting system-level analysis of energy losses, aimed at upscaling RFB performance from single-cell laboratory experiments to stack level. The model is used to simulate multi-cells vanadium redox flow battery (VRFB) and aqueous organic redox flow battery (AORFB) systems, considering the effect of design and operational parameters on energy losses and overall performance.

The multi-cells zero-dimensional model is used to investigate the effect of pump, shunt current, overpotential, and crossover losses, and to evaluate their contribution to total energy losses.

Results show that these parameters contribute to overall RFB performance to varying degrees.

Decreasing the manifold diameter is found to reduce shunt current losses without significantly increasing pumping losses, thus improving the roundtrip efficiency. Also, while it is beneficial to slightly increase stack current at a small flow rate to yield more power, a trade-off between stack current and flow rate is essential.

Compared to vanadium, by using the same stack and by optimising current and flow rate, the organic system, chemical composition will be soon disclosed in scientific publications, has shown to produce less power and energy, with a roundtrip efficiency of between 50 and 60%, albeit with a comparatively lower share of shunt current losses to the total energy losses. While the energy can arguably be increased by using solid boosters, the power output needs to be enhanced by significantly reducing the area-specific resistance of the cell and, simultaneously, by increasing the limiting current density; additionally, looking for redox couples with higher open-circuit voltage is another suggested direction for research. In summary, the modelling activities enabled the understanding of critical aspects of RFB systems during their scaleup from cell to the stack level and provide a valuable tool for system design optimisation as well as for techno-economic assessments.

Here below you can see examples of results presenting (a) the roundtrip efficiency (RTE) and effective power (P eff ) discharged for different values of current and flow rates (b) Breakdown of energy losses (pumping, overpotential, crossover and shunt) and (c) effective energies in the roundtrip at the nominal operating point of 2.5 kW discharge power (i.e., I = 51.5 A, Q = 20.5 L/min) during charge and discharge. 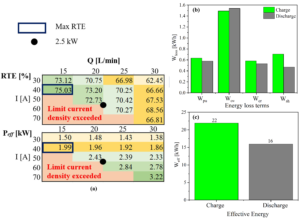 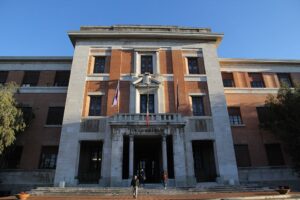