The objective of Work package 2 is the construction of a finite element model for a redox flow battery, parametrized with input data coming both from density functional theory (DFT) calculations and experimental measurement. The purpose of this model is the development of a predictive tool for conventional and solid boosted redox flow batteries with an experimental validation. This model should be able to predict the voltage and current generation. To reach these objectives, it is necessary a permanent synergy between all the WPs involved in the project.

UU contribution in the project is summarized in three tasks: multiphysics finite element flow battery model, parametric sweep and packed bed reactor model. In the first two tasks a time dependent model was constructed using the software COMSOL Multiphysics. The starting point was a vanadium redox flow battery model in order to reproduce the main features of the electrochemical behaviour. This model combines a 2D approach for the flow cell and a 0D representation of the tank. The parameterization was carried out combining the experimental measurements with a parametric sweep.

A flexible model was created with the objective of adapting the electrochemistry to new redox species without a significative change in the computational approach. A similar study was performed for the species BTMAP-Fc /BTMAP-Vi and the results showed a good agreement with experiments.

In the third task, the proof of concept of a computational model for a packed bed reactor filled with solid boosters was developed. The computational approach combines two models, on the one hand the flow battery model aforementioned and, on the other hand, the addition of an explicit representation of the tank with a solid booster, choosing LiFPO4 as a solid material. For the last one, the electrochemistry was studied using the Newman model for an equivalent Li-ion battery and the Butler-Volmer equations for the intercalation process in the solid material. This proof of concept has demonstrated that, despite simplifications, the addition of the solid material in the reservoir of the tank disruptively increases the battery capacity.

In the framework of the CompBat project, a detailed thermodynamic study of this kind of batteries has been published and a multiscale approach of this kind of devices is depicted in the figure below. 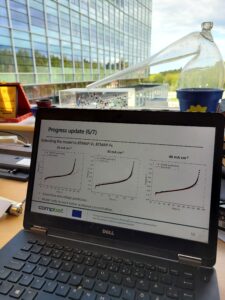 Flow cells being simulated in front of the new Ångström building at Uppsala University, Sweden.